I'm getting ready for the Legends of Kung Fu Tournament in Dallas, Texas on July 22-24.  I'm specifically promoting the Tru2Form division, which will be held on Sunday, July 24.  Please watch the video below and get involved!  We need you!!

I'm also conducting 2 seminars at the tournament this year - "The Art of Being Pushed" and "Taiji Punching Hands", on Sunday July 24 as well.  The "Taiji Punching Hands" seminar will address the issues that I have discussed in this blog - how to gradually transition your training from "pushing" to "punching" hands in order to master Tai Chi as a true boxing art.  Please go to my Facebook page, or visit www.legendsofkungfu.com for more details!

Hope to see you there!!!

In my last post, I brought up the question of whether Tai Chi had present-day relevance to martial combat.  I spoke of the need to repair the bridge back toward Tai Chi's true definition as "Grand Ultimate Boxing".  Today, I'm posting a video in which I offer a possible solution:  Tai Chi Boxing training through stages of Tai Chi Push Hands training.

Hope you enjoy the video!  I would love to hear your thoughts in the comments below.

I've also conducted multiple seminars and extensive training on Tai Chi Push Hands, so if you are interested in learning more, including my specialized training method in "The Art of Being Pushed", please contact me at the number you see at the right of your screen.

Look forward to hearing from you!

Posted by Unknown at 5:03 PM No comments:

DOES TAI CHI HAVE MERIT IN MARTIAL COMBAT?


First, I would like to say that Tai Chi is one of the greatest martial arts of all times.  It is often misunderstood, because a major part of this mysterious practice involves the concept of using softness in a way that overcomes hardness.  This is a difficult concept to grasp.

Historically, Tai Chi has had a long history of success on the battlefield.  However, somehow, it appears that Tai Chi has lost its way as a boxing art in today's time. (my opinion)

Several years ago, I began observing individuals who said that they were masters of Tai Chi, but seemed to have inferior fighting skills.  I was frustrated with this trend, and my frustrations were vented in a way that I did not intend.  Some individuals took my comments as a personal criticism – believing that I was saying that their training had no real foundation.  However, that was not my intention.

I was only voicing my passion and desire for Tai Chi to be respected as a true martial fighting art, as well as a healing art.  In today’s time, the focus is on Tai Chi as an “internal healing art”, which I whole-heartedly believe to be true and practice daily.  However, the fighting aspect has been greatly ignored.

I am a national/international competitor who has fought in many full contact competitions worldwide using the principles of Tai Chi.  So, I truly believe in Tai Chi as a boxing art.  Based on my experiences as a competitive and street fighter, and the successes achieved through this art, I would like to see us be examples to those inside and outside of the “internal martial arts world”, proving to the other branches that Tai Chi has merit in boxing.

“Tai Chi Chuan” -- its interpretation means “Grand Ultimate Boxing”.  This is a BIG statement!  It's like saying you're the “Fastest Gun In The West”.  If a gunslinger were to say that about himself, somebody else would want to test that claim to see if they were faster.

Let's go back to the feudal days of China and then think about those days through the lens of an old Western movie flick.  Picture this:

¨        There are many kung fu fighters from many different systems hanging out in the saloon:  with dancing girls - a piano player - smoke in the air - lots of drinking – etc.

¨         A lone man, dressed all in white, walks through the door……The music and the dancing stops….. Everybody turns and looks at the stranger in dead silence.

Think about it!  By saying “I’m Tai Chi Chuan”, he’s saying “I’m the Ultimate, and everything you do is obsolete!”.  In wild west terms, he just insulted the whole saloon by saying “Tai Chi Chuan”.  So, if you’re going to SAY that you’re the fastest gun in the west, then you also have to PROVE it.

Yang Lu Shan is a legend in Tai Chi and is the founder of his own style – Yang Family Tai Chi, practiced by millions today.  He was called "Yang the Invisible" for a reason!  What happened to that history?

Tai Chi Chuan is truly great as a fighting art and deserves the label “Grand Ultimate Boxing”!  What happened?  How did we lose this treasure?

My passion remains the same - we have to restore this bridge.  We must make sure that Tai Chi – as a whole – is taught and practiced, so that Tai Chi holds its own amongst the other martial art branches.

And, of course, I’d love to hear from you in the comments section below.
Posted by Unknown at 4:40 PM 1 comment:

THE TREE OF MARTIAL ARTS, THE BRANCHES AND LEAVES

Welcome!  My name is Christophe J. Clarke.  I have been “practicing” martial arts since the mid-‘60s, and I continue to do so.  Even after years of martial arts exposure, practice, training, competing, and teaching – I believe that I am “just average” - still seeking a higher level of martial understanding and always digging deeper for more knowledge and wisdom.

When I was young, and just beginning my martial arts training, I tried to absorb everything about it.  And, unfortunately, I picked up some incorrect perceptions along the way.  For example, I used to believe that there was a difference between karate and kung fu.  I thought that kung fu was better than karate, and I also knew that others believed the opposite to be true.

As I matured within the practice of martial arts, I soon learned that believing one art is better than another is actually an ignorant thing to say.  But, unfortunately, many people still don’t know the difference.  Here is what I mean:

Karate simply means “empty hand”.  Kung Fu means “great skill” or “don’t give up”.  When you get to the depths of these arts, you realize that their true definitions have nothing to do with fighting, but everything to do with consciousness.  In this way, the arts are the same.

Throughout my life, I have met some of the greatest martial artists and masters of all time.  I have been blessed to travel and experience martial arts in China, Korea, Japan, Singapore, Malaysia, Taiwan, Russia, Argentina, Germany, Brazil, Canada, and the U.S.  My life has been a great adventure – seeing the world, meeting new people, learning new languages, and experiencing other cultures.

From all of these amazing experiences, I have learned that:  (1)  martial arts is something we ALL share, something that is loved in each and every place I have traveled; and (2) the world is actually really small and we're not so different from our brothers and sisters afar.

For this reason, I chose to write my first blog post about the relationship that we ALL have to the tree of martial arts - a tree that has many branches and many leaves, but which all come from one source and one seed.  My hope is that we continue relating with each other through our arts and respect the tree itself as a whole (because cutting down a branch would be like cutting down yourself).

In my opinion, martial arts is like the Armed Forces.  In the U.S., we have Marines, Army, Navy, Air Force, and the Coast Guard - all working for one purpose, which is to keep the country safe.

Whether you focus on a particular branch or a particular fighting technique, whether you call it “Armed Forces” or “Martial Arts” – they are all “forces” that work together as a group or system for one cause or goal.

So, let’s focus on the tree and all do our part toward the common goal and deep meaning of martial arts.  I hope this blog will help in promoting this goal, as I will continue speaking on this issue in the weeks to come.  (And, of course, I would love to read your comments and opinions in response.  This is an important issue within the world of martial arts!)

DOES TAIJI HAVE MERIT IN MARTIAL ART WARFARE?  In my next post, I will comment specifically on Taiji and how we together need to restore the bridge to this lost treasure.  We all must do our part in this mission, so we must discuss our responsibility in Taiji as a martial art.

Posted by Unknown at 8:46 AM No comments: 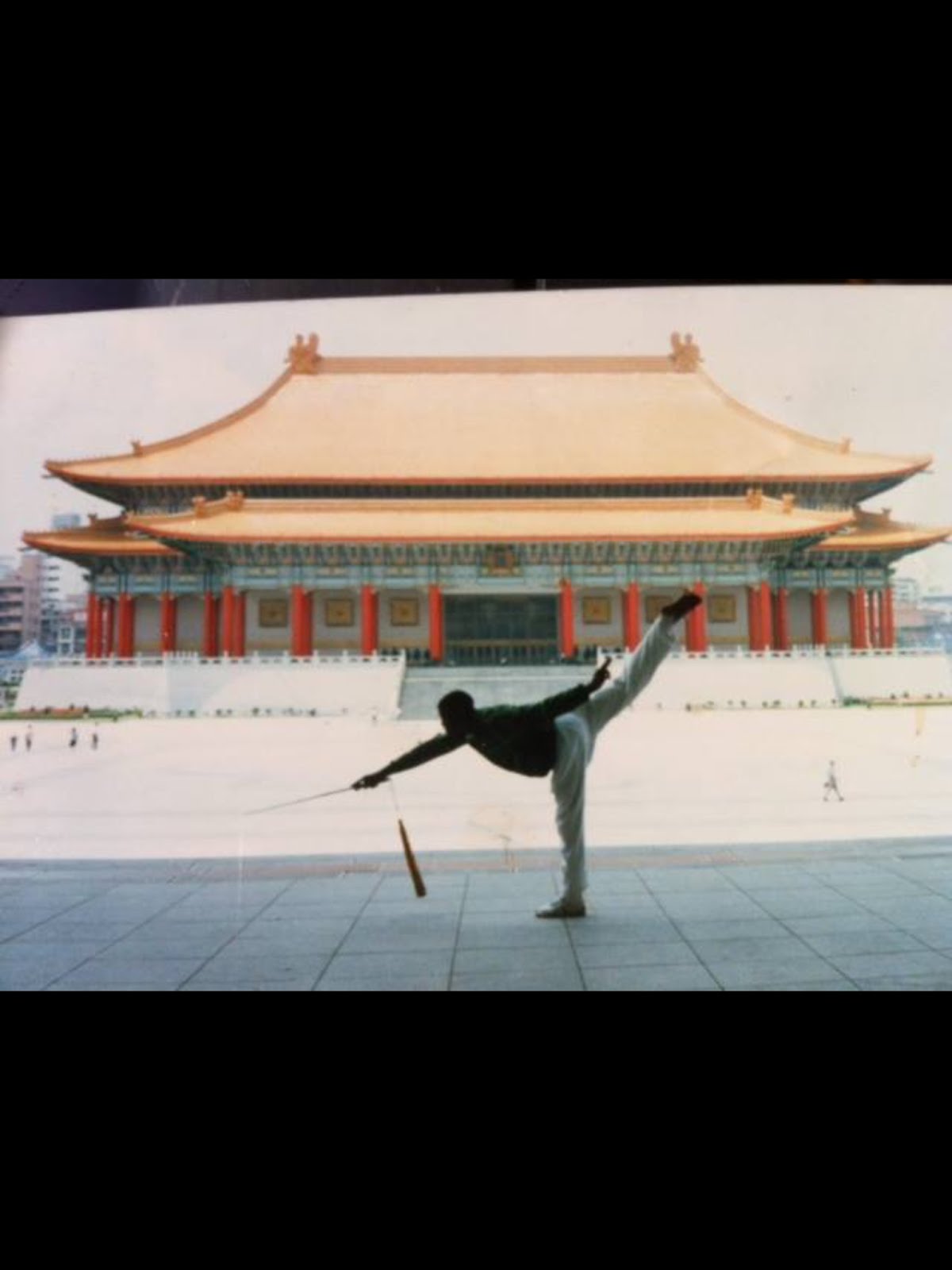